A 2 hour (approx.) walk  learning how to identify wild edible spring plants, that are growing in the hedgerow and riverside, and the poisonous plants you could mistake them for. 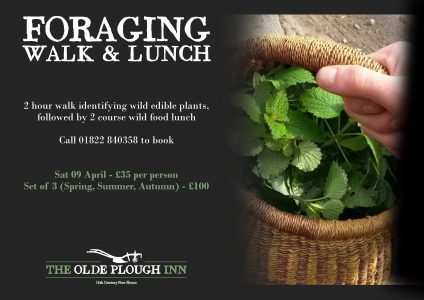 Ending with a delicious meal at The Old Plough Inn sampling the wild food we find.

Spring Walks: Meeting at 11:15am at the Bere Ferrers Train Station (15 minutes from Plymouth, coinciding with the 10:54am departure from Plymouth to Bere Ferrers train station) Saturdays 11th March, 8th April and 6th May

Download  – ‘Getting To Know Wild Plants’ by Flora Arbuthnott

Tamar Energy Community is looking forward to this event. A great chance to catch up with what’s going on in the market. And you can find us in the Communities section. Let us know if you’re planning to go.

Organised by RegenSW. Find out more here:  www.smartenergymarketplace.co.uk
28 March, Sandy Park, Exeter from 10.00 am to 4.00 pm

A unique showcase of the emerging smart, decentralised energy system of the future – a radical shift in the way we power our lives that is creating huge opportunities.

The exhibition features over 100 companies including smart energy technologies, renewable energy installers and developers, construction companies, training providers, manufacturers, consultants and advisors, energy assessors, financiers and banks. Find out more about exhibiting here. The high level conference provides the latest overview of the sector. Designed for those who are already developing projects or those looking to explore complex policy areas or opportunities. Find out more about attending here.

You can also book here and download a flyer here.

There has been an outbreak of sweet chestnut blight in the South West and there are four 5km zones that are subject to movement restrictions.
Sweet chestnut blight is caused by a fungus called Cryphonectria parasitica, which gets into the trees through wounds or graft sites. Although oak trees suffer very little damage if they are infected by the fungus, they can spread it, so restrictions on movements of oak material are also required as a precaution.
Sweet chestnut blight was found in Devon in December 2016, initially south of Exeter.  We wrote to our Devon contacts in January to inform them and again last week to let them know about two restricted zones; you may have seen articles in the forestry or local media about this. As a result of related survey and tracing work, we have now identified another zone in Devon and one in Dorset where restrictions are required. We are now writing to all our South West contacts to let you know what we are doing to manage the outbreak and to inform you about the movement restrictions.

Read more here …
Managing the outbreak
The Government is committed to doing all it can to prevent plant pests and diseases crossing our borders, and although we cannot eliminate all risks, we have stringent plans to deal with threats, and take prompt action when they are detected. To this end we work collaboratively with the international community, industry, NGOs, landowners and the public to reduce the risks of pests and diseases entering the country and to mitigate the impact of newly established ones.

C. parasitica is a quarantine organism, so the Government’s Chief Plant Health Officer has activated our contingency plan for such an event, in compliance with our obligations under the UK’s Protected Zone status for this disease. We and our colleagues in the Animal & Plant Health Agency (APHA) moved quickly to implement the contingency plan, and in particular we have taken the following measures.

Movement Restrictions
UK plant health authorities have introduced a prohibition on the movement of sweet chestnut and oak material within four specific zones in Devon and Dorset. A prohibition on two zones in Devon came into force on Friday 24 February 2017. Two more will come into force on Thursday 9 March 2017, one in Devon and one in Dorset. The exact boundaries of all of these zones are shown in notices and maps on the Forestry Commission and Gov.uk websites (please scroll to the end of each notice for the relevant map). The zones will remain in place until further notice and will be kept under review.
This prohibition is implemented by Plant Health (Sweet Chestnut Blight) (England) Order 178/2017. It makes it illegal to move sweet chestnut material including plants, logs, branches, foliage and firewood out of, or within, zones covering a 5 kilometre (3.2 mile) radius of the affected sites where sweet chestnut blight has been found. The same restrictions apply to oak within 1 kilometre (0.62 mile) of the same sites. Exceptions to this movement prohibition include oak or sweet chestnut material entering and exiting the zones without stopping. For example, the delivery of plants, logs or firewood which start and end their journeys outside the zones is permitted.
Exceptions may also be granted in certain circumstances by the Forestry Commission (southwest.fce@forestry.gsi.gov.uk or telephone 0300 067 4960), in the case of woodland sites, or by the Animal and Plant Health Agency (APHA) Plant Health & Seeds Inspectorate, for horticultural requests (01904 405138 or by emailing planthealth.info@apha.gsi.gov.uk).
The Forestry Commission and APHA are working closely together to carry out tracing activity and inspecting sweet chestnut trees at other sites which may lead to more zones being established. Further advice will follow should this be necessary.